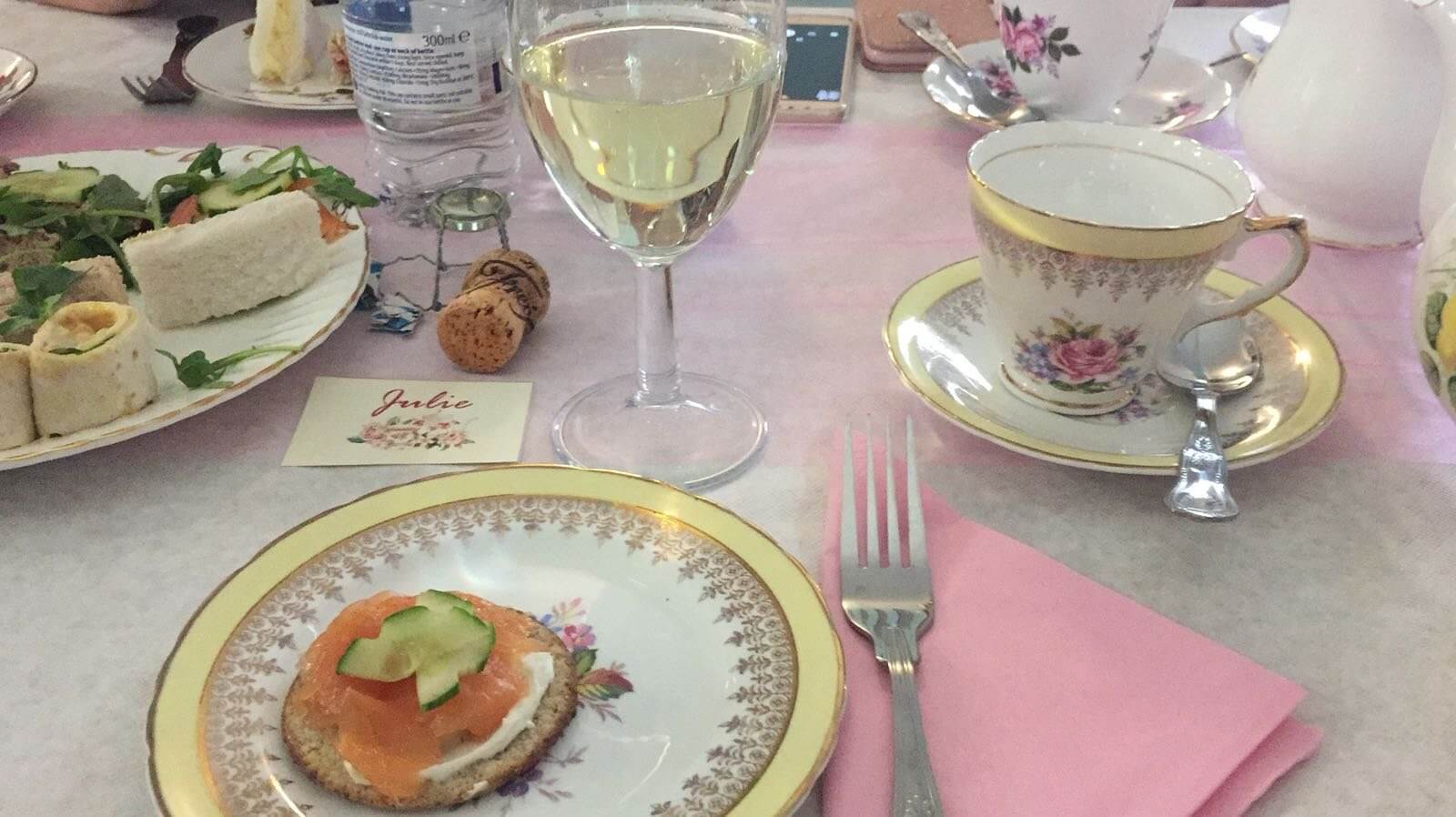 An Afternoon Tea Party can make a fabulous charity fundraiser. Fundraising doesn’t have to involve running miles in the pouring rain training for a marathon. What better way to support your favourite cause than getting a group of friends together to eat cake and drink tea?

We recently held a Vintage Afternoon Tea Party in aid of Cancer Research UK, and raised over £1,500. We had a fabulous time doing it and ate a lot of cake. So, I thought I would share with you how easy it was to organise.

This is supposed to be a fun way of fundraising, so get a couple of friends who will help you out with what you are trying to do, make a cup of tea, and chat through the following headings: 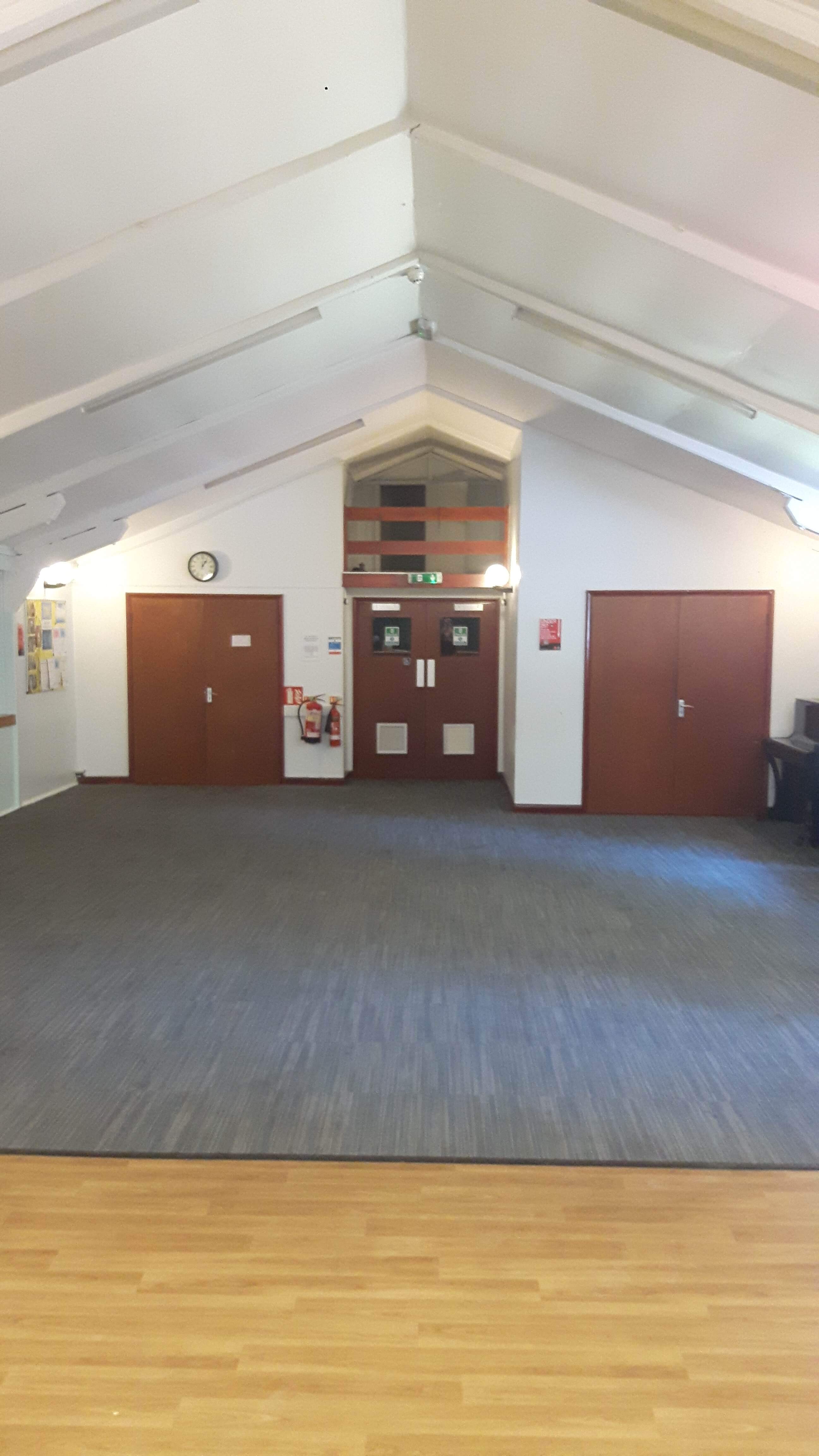 You may be lucky enough to have somewhere you can use for free. We rented our local Village Hall, which cost us £75.

You need to be clear on the size of the event you are looking to host. We knew we wanted about 50 people for a sit down event.

Who are you going to invite and how will you invite them? Obviously, you’ll want to invite your friends and family but encourage them to extend the invitation to their circle of friends. We set up an event on Facebook, which could then be shared by friends, and made flyers to hand to friends who aren’t on Facebook.

We made tickets and sold them before the event. This was important to us because we needed a definite idea of how many people were coming so that we could cater without too much waste. Also, as it was a sit-down event, we needed to have the right number of place settings.

Another advantage of getting people to pay for tickets in advance, is most people will have a limited amount of cash on them when they come to the event and if you want them to buy extras like raffle tickets, you need them to have as much of that cash available as possible.

Deciding on the price is tricky. You don’t want to set it too high and put people off, but you also want to make enough profit to give to your chosen charity. It’s important to remember that people are buying tickets to support that charity, and they are getting something in return – a great afternoon with friends and lots of cake! We charged £12.50 for tickets. 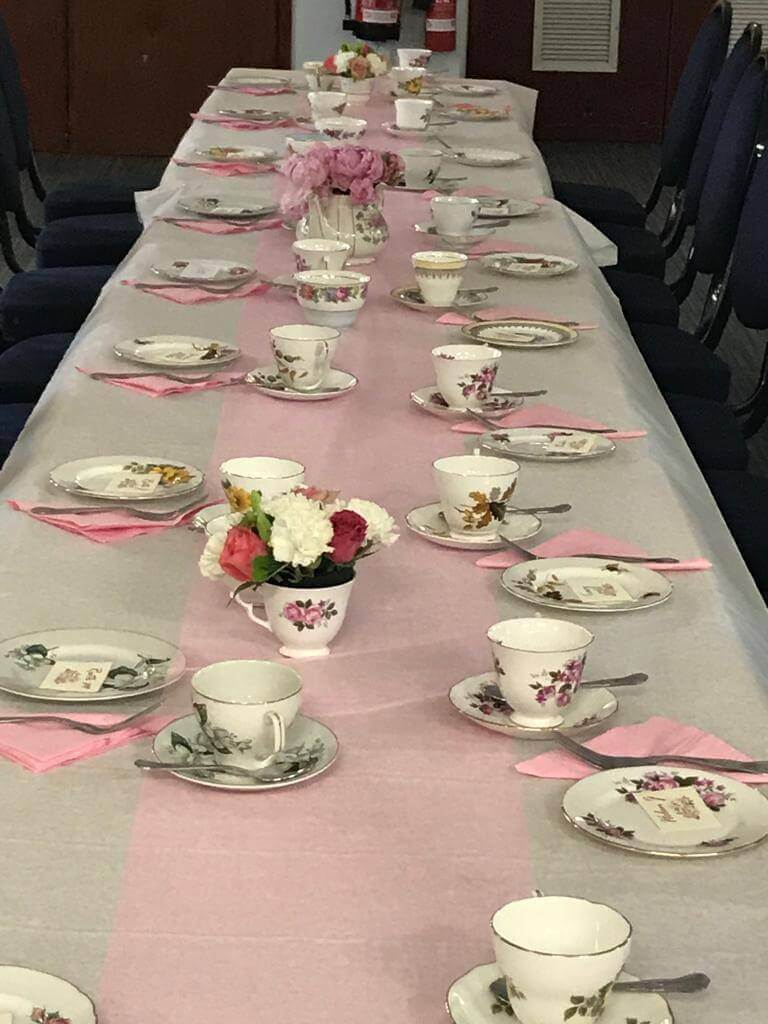 If you can get people to donate prizes for a raffle, it’s a great way of adding additional profits to the event. Don’t be afraid to ask local businesses to donate raffle prizes. We sent an email to local pubs and restaurants, shops, hairdressers, attractions and children’s play centers etc.

We were overwhelmed by how generous they were. At the end of the day, the worse that will happen is you either don’t hear back, or they say no!

There are a couple of considerations with raffles. If you are only going to sell tickets are the event, you can use a book of cloakroom tickets that you can pick up at any supermarket.

However, if you want to sell raffle to any person who isn’t at the event, for example to people who are busy on the day of the event but would still like to support the charity, you’ll need a licence. Don’t be put off by that, it isn’t as scary as it sounds.

Small Society Lottery Licences are looked after by your local council. My council have a Gambling Department and they were very helpful. It cost me £40 to get the licence and I did it online.

Once I had the licence for the raffle tickets, I had some proper raffle tickets printed. I found a company on E-bay who designed them for me. It was about £20 for 1,500 raffle tickets. I then asked a group of close friends to sell them at school gates, at work, and among their friends.

There’s no doubt that the £60 I spent on the licence and having the tickets printed, led to higher sales for the raffle than limiting it to the 50 or so people at the Afternoon Tea Party. 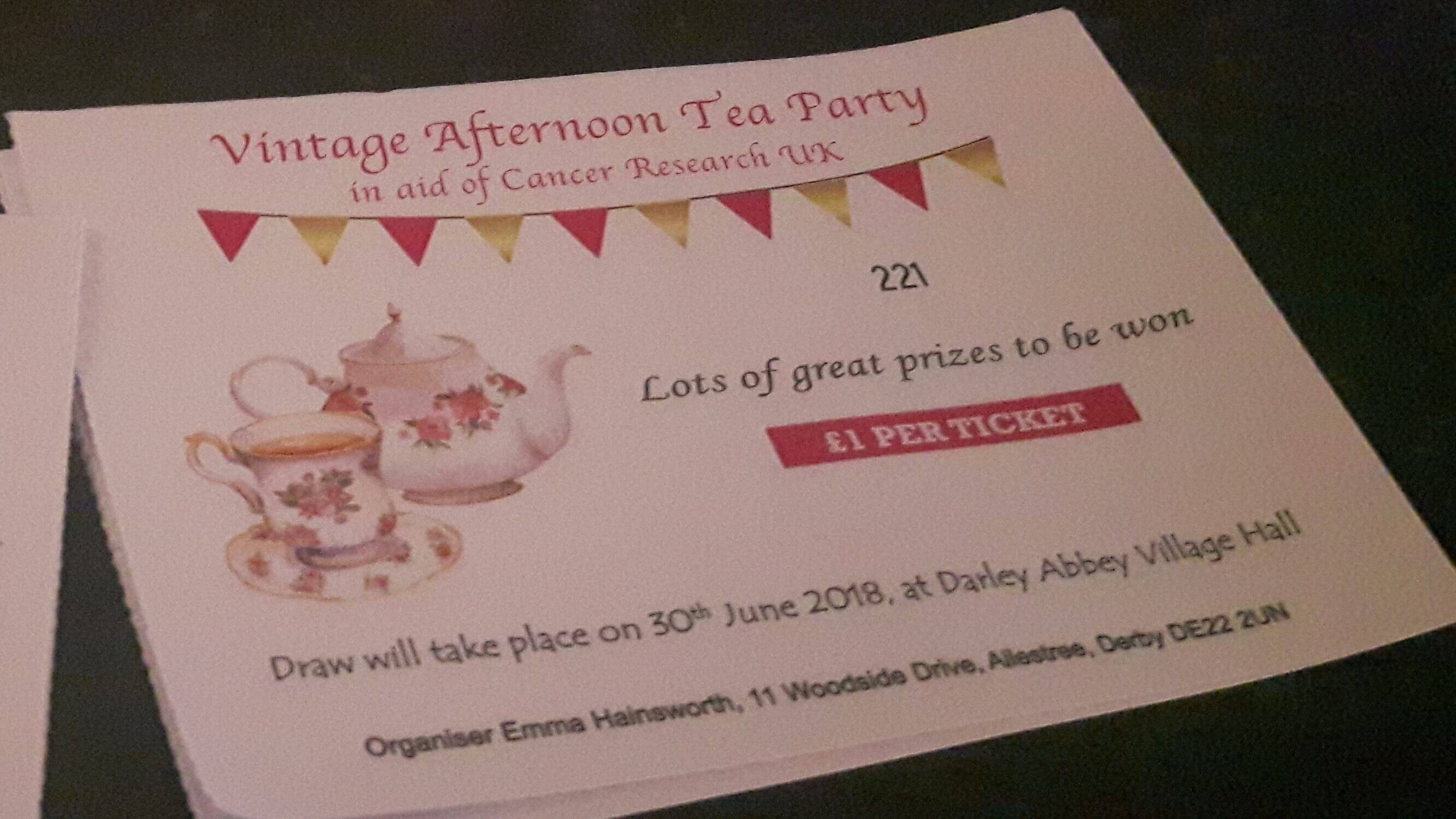 You want your guests to have a great time at your event, and you want to raise as much money as possible. One way to do this is have a game of bingo. It’s ideal as everyone is sat down for the afternoon tea, and it’s very cheap to do.

Bingo tickets can be bought either online or in supermarkets, pound shops etc. Don’t forget you’ll need pens! There are free apps you can get on your phone or tablet which will draw the balls randomly for you.

We had 3 games of bingo, and charged £1 a game. As well as being fun, it adds extra pennies to what you raise.

We also have a “Bake Off” competition. People bring cakes along, and a team of very lucky judges get to cut a slice and sample it. A winner is chosen but the rest of the cake can then be put on the cake stands as part of the Afternoon Tea. If there’s any cake left, we sell it off at the end for people to take home.

There’s no doubt arranging an event like this is hard work, but if you do it as a group of friends it can also be great fun.

Everyone has their own talents too so ask people to do things which suit them. A chatty person will make a better raffle ticket sales person. Someone who is a good cook can make cakes. An arty person can help set the table and make the room look fabulous.

Get friends to help you make sandwiches before the event, and ask people to make cakes (I don’t think you can every have too much cake!) 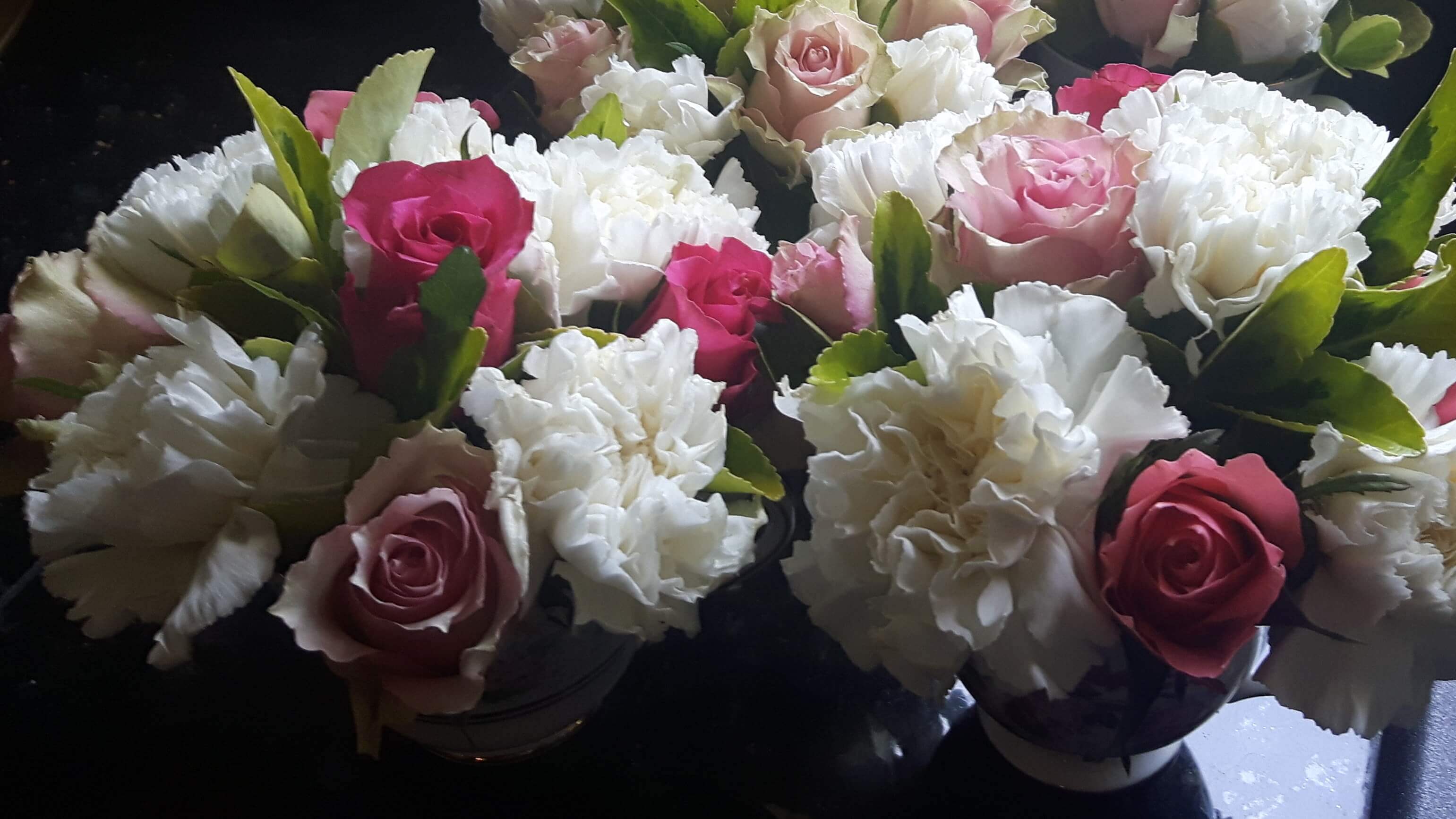 We started with a blank Village Hall which had trestle tables. We brought banqueting roll from a pound shop, and I got a roll of pink organza from Amazon to put down the middle of the tables. Our floral centre pieces are easy to make and you can find out how to.

Hiring the Hall – £75
Decorating the Hall – £33.43 On Organza, banqueting roll, napkins, flowers
Raffle – £60 On getting the licence and having tickets printed
Games – £47.76 On Bingo Tickets and pens, prizes for bingo and tombola
Sandwiches – £40 All the cakes were donated to us by friends and guests
China Hire – £120 (see Hire Prices for an idea for the number of guests you intend to have)
So, having spent under £400 we raised over £1,500 for Cancer Research UK and had a fab time doing it.

If you do hold your own Afternoon Tea Party as a fundraiser, tell us about it and send us some pictures.

Google API Error: You must enable Billing on the Google Cloud Project at https://console.cloud.google.com/project/_/billing/enable Learn more at https://developers.google.com/maps/gmp-get-started
Local API Error: No route was found matching the URL and request method.